On October 5, 2017, The New York Times released an article exposing decades of sexual abuse perpetrated by Harvey Weinstein, a well-known film producer and powerful player in Hollywood. After the article’s publication, a stream of new accusations surfaced, and journalists dug deeper, discovering a network of employees and private investigators who gathered information on victims and used non-disclosure agreements to intimidate them into silence.

The world looked on, many shocked by how sinister the story became as it deepened, others appalled that someone could get away with abuse for so long. But for survivors, each development just proves long-held truths about sexual violence.

END_OF_DOCUMENT_TOKEN_TO_BE_REPLACED

The opioid epidemic has received national attention recently thanks to the president’s address and a growing number of lawsuits against opioid producers. However, the crisis has been steadily worsening for over a decade.

For me, opioids continue to be a growing problem in family law. They lead to parents losing custody and children losing parents, and they complicate or worsen domestic violence situations. I wrote about a case involving opioids for my firm’s blog in September, and again on this blog in October, but the discussion is far from over. As the government begins to address the opioid crisis, it is even more vital that the general public understands it.

END_OF_DOCUMENT_TOKEN_TO_BE_REPLACED

Shows like Law and Order depict lawyers winning cases with confident arguments and saucy comments. However, charisma doesn’t make a trial lawyer successful – trial preparation does. Each case hinges on having the proper information prepared and having the right evidence to build on. Because lawyers prepare for trial behind the scenes, we don’t often see how much work goes into trial preparation.

First, the lawyer files their pleadings with the court. A pleading is a document that states the party’s position. In divorce, the lawyer files a “complaint for divorce.” If one spouse files the complaint (rather than both filing jointly), then the other will respond to it by filing answering pleadings. The lawyer must be meticulous and make absolutely sure they file the pleadings correctly.  If they don’t, it will undermine the rest of their trial preparation.

After filing the pleadings, the lawyer begins discovery.

END_OF_DOCUMENT_TOKEN_TO_BE_REPLACED

The Washington Post and “60 Minutes” released a report this weekend revealing how Congress and pharmaceutical companies deliberately allowed the opioid crisis in America to worsen by passing a law that crippled the Drug Enforcement Administration’s ability to combat the epidemic. The opioid epidemic itself has resulted in over 200,000 deaths in the past two decades, a number which continues to increase.

The effort succeeded in April 2016 when Congress passed the Ensuring Patient Access and Effective Drug Enforcement Act, which the DEA had fought for years. The law makes it much more difficult for the DEA to freeze suspicious drug shipments by making the criteria for such actions more stringent. The effect is immediately visible – the DEA has issued only six suspension orders this year, compared to 65 in 2011.

The DEA’s troubles began far before 2016, however. In 2013, Jim Geldhof, the Detroit DEA program manager, discovered that Miami-Luken, a medium-sized Ohio-based drug distributor, had shipped 11 million doses of oxycodone and hydrocodone to Mingo County, West Virginia, which has a population of 25,000. Of those, 258,000 were shipped to one pharmacy in Williamson, which has a population of 2,924. West Virginia has the highest opioid death rates in the nation. However, Geldhof’s attempts to suspend Miami-Luken’s shipments were unsuccessful as he was dismissed by the company and lawyers.

END_OF_DOCUMENT_TOKEN_TO_BE_REPLACED

In the cradle of civilization, Babylonian scholars studied the stars and made predictions based on their movements, recording knowledge that would serve as the foundation for the astronomical sciences. After three thousand years of scientific advancement, scientists made a new discovery on October 16, when they observed two stars merge.

The phenomenon, called a neutron merger, occurs when two neutron stars in a binary system come into contact and merge, emitting gravitational waves and visible light. Neutron stars are one of the densest objects in the universe, typically measuring around 10 miles in diameter yet possessing the same mass as our sun. Due to this density, they move very quickly, and only 5% are in binary systems.

This discovery begins to answer long-held questions about where the elements in our universe originated. Scientists observed that the explosions in neutron mergers release radioactive waste and propel heavy, opaque elements into surrounding space, creating a telltale red hue. The heavy elements produced by these mergers include gold and platinum. In fact, scientists estimated that the merger produced 200 Earth masses worth of gold – Earth’s mass is 5.972 × 10^24 kg. Written out, that’s 5,972,000,000,000,000,000,000,000 kg. According to scientists, this data indicates that neutron mergers could account for all the gold in the universe, as well as half of elements such as silver and platinum.

END_OF_DOCUMENT_TOKEN_TO_BE_REPLACED

Last week we discussed the damaging nature of emotional abuse, as well as the cycle that abuse follows. We emphasized the importance of understanding the cycle of abuse in recognizing and combating domestic violence, but how can we tell when someone is being abused, and what do we do? 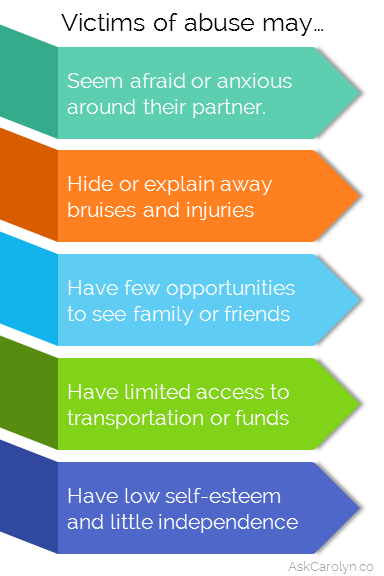 First off, the individual being abused will often undergo major changes in how they act – even if they were confident before, they will likely lose this confidence, their self-esteem dropping rapidly as the abuser undermines their self-worth. The individual will be afraid of their partner and may alter what they say or how they say it when their abuser is around, restricting their speech to avoid angering them. They may agree with whatever their abuser says or be hesitant to say anything negative about them. They may suddenly alter or cancel plans due to the abuser’s demands, and may not be able to see friends or family often. Their resources may be limited as well, such as their access to money or transportation.

So if we see these signs, what do we do? In helping a victim of abuse, we have to be careful with our approach – attracting the attention of the abuser could result in the victim’s situation worsening. The best approach is to find an opportunity to talk to the victim in private and express your concern. Tell them about what you’ve noticed and let them know that they have your support. It’s important for the victim to know that they have someone they can go to, as the abuser wants them to be entirely dependent upon them. However, the victim may not be receptive to your approach – abusers are highly manipulative, and victims may often take their side. Be understanding of the victim’s feelings and respect the fact that the decision to get help is up to them. Victims of domestic violence are given very little autonomy by their abuser, and what independence they do have is vital.

END_OF_DOCUMENT_TOKEN_TO_BE_REPLACED

Tuesday’s blog touched on the difficulty that some survivors of domestic violence have when they try to reconcile the good memories of their relationship with their abuse. In trying to reconcile the good with the bad, victims may start to rationalize the abusive behavior and second-guess themselves.

This tendency of the victim to downplay their abuse (especially while still in the relationship) is reinforced by the abuser’s talent for hiding their behavior. Abuse occurs in a cyclical pattern called the cycle of abuse, and abusers tend to perpetrate abuse only during half of this cycle. During the other half, they attempt to “atone” for their behavior, creating a sort of push-and-pull dynamic where they abuse their partner, then keep them from leaving by promising to change. This dynamic often serves to make the victim even more dependent on their abuser, and the inconstancy of the abuse makes it harder for both the victims and others to identify it.
END_OF_DOCUMENT_TOKEN_TO_BE_REPLACED

October is Domestic Violence Awareness Month, and #maybehedoesnthityou has resurfaced on twitter as victims and activists use the hashtag to speak out about non-physical forms of domestic violence.

While physical violence is what most people think of when they hear “domestic violence,” emotional abuse often occurs alongside or before physical violence, and can be just as damaging. However, because this form of abuse doesn’t leave physical marks, it can often be harder to recognize for both the victim and those who know them.

Most abusers are seeking to control their victim – emotional abuse undermines the self-worth of the victim until they believe they are totally dependent upon their abuser. The abusive partner may use a variety of tactics, such as minimizing the victim, isolating them by cutting them off from their support network, humiliating them, or gaslighting them. Gaslighting is a particularly insidious tactic, as it seeks to make the victim question their memory. This is frequently done by denying any abuse ever occurred, and makes it that much harder for the victim to seek help.
END_OF_DOCUMENT_TOKEN_TO_BE_REPLACED

World Mental Health Day (Oct 10th) comes on the heels of a violent attack in Las Vegas which left 59 dead and over 500 injured. As with other shootings, the public’s response is to point at guns and mental illness – and while it remains divided on the issue of guns, the relative agreement on the threat of mental illness is worrying.

The American public has always seemed to lack an understanding of mental illness. Most people know the common names and defining symptoms of a few illnesses (usually bipolar, schizophrenia, and depression), but have no real understanding of what these illnesses entail. END_OF_DOCUMENT_TOKEN_TO_BE_REPLACED

The opioid epidemic is a problem quickly shifting to the forefront of American consciousness, but it seems many people fail to grasp the breadth of the issue and just how close to home it truly is.

For many people, the word “opioid” conjures up television images of too-skinny junkies in filthy rooms, or delinquent teenagers raiding mom’s medicine drawer. But these images are of addiction in its full swing. In many cases, it looks different at first –it looks like your loved one taking their prescribed pain medication. And for some, this reality is a hard pill to swallow. END_OF_DOCUMENT_TOKEN_TO_BE_REPLACED