What better way to beat the heat this July than with patriotic popsicles? If you want to really knock the socks off your neighbors though, you can’t settle for store bought. But of course, that’s why you’re here.

Ready to pick some flavors? Let’s start off with white.

END_OF_DOCUMENT_TOKEN_TO_BE_REPLACED

Today’s Ask Carolyn answers two questions about summer vacation. Our first reader wants to know what the ground rules should be for a multi-generational beach trip. Our second reader is taking the family cat for a sail.

I just turned in the dates for my summer vacation weeks with my sons (ages 6 and 9) to my ex. In even years I pick first by May 1. I get three total summer weeks split as two weeks and one week. Week isn’t defined, but that is another story for another day and a source of arguments. I picked Saturday to Saturday because of my beach rental for the one-week session. My two boys and I are camping in the Rockies the two-week time. Now for my questions regarding the one-week time, which I would like to do with my parents, the paternal grandparents of my children:

END_OF_DOCUMENT_TOKEN_TO_BE_REPLACED

Easter is just around the corner! Pastels, bunnies, and eggs are the order of the day this weekend, and I’ve collected some DIY Easter crafts, activities, and recipes to help you spice up your celebrations this year. And with the long weekend from Good Friday, you’ve still got plenty of time to try these out with the kids!

These origami bunnies are adorable! All you need is printer paper cut into squares, and you’re on your way to a whole family of them. Because they’re made from plain white paper, your kids can decorate the bunnies as well as their Easter eggs. Alternatively, you can let your kids decorate the paper before folding the bunnies, so that the final product is a surprise.

END_OF_DOCUMENT_TOKEN_TO_BE_REPLACED

Valentine’s day is aimed at couples, and those who are single often feel left out or disenchanted. But while the focus of Valentine’s may be romance, there’s no reason you can’t celebrate love of all types.

Platonic love is perhaps one of the most underrated kinds of love. Our friends are the people who support us every day, comforting us when we’re hurting, laughing with us when we’re not. But we don’t recognize that love nearly as much as we do romantic love.

The love we share with friends, siblings, and parents is just as worthy of celebration as the love of a significant other.  So if you’re feeling down about being single on Valentine’s day, try celebrating the other types of love in your life.

END_OF_DOCUMENT_TOKEN_TO_BE_REPLACED

Valentine’s day is approaching, and pink and red coat nearly every store. Shelves are overflowing with heart-holding bears, roses, and assorted chocolates with dubious fillings. Everything is marketed to say “love,” but is a prewritten card truly the best way to express that?

I’m a firm believer that the most meaningful gifts are the ones that you put effort into. The Christmas before I moved out, my parents gifted me dishware and supplies for my new home. Among these gifts was a cheese cutter from my dad. Instead of buying a cheese cutter, he instead spent hours of his time making one – and unlike spent money, spent time is gone forever. Of all the gifts I’ve received, this one stands out the most due to the work my dad put into it.

It isn’t just the time spent that makes such a gift special, though. Making a gift means you aren’t limited by a store’s selection, so you’ll always be able to choose something perfectly tailored to the recipient.

END_OF_DOCUMENT_TOKEN_TO_BE_REPLACED

During my holiday travels, I found myself in Hot Springs, Arkansas. As a little adventure, we made a stop at the Arlington Hotel.

The Arlington Hotel originally opened in 1875 and has been rebuilt twice since. The hotel has had many famous guests, including Al Capone, who used to rent an entire floor for his gambling scheme. The bathhouse spa looks like it hasn’t changed since the 20s, either – what a nostalgic event for Dwight and me! Of course, men and women have separate sections of the bath house. 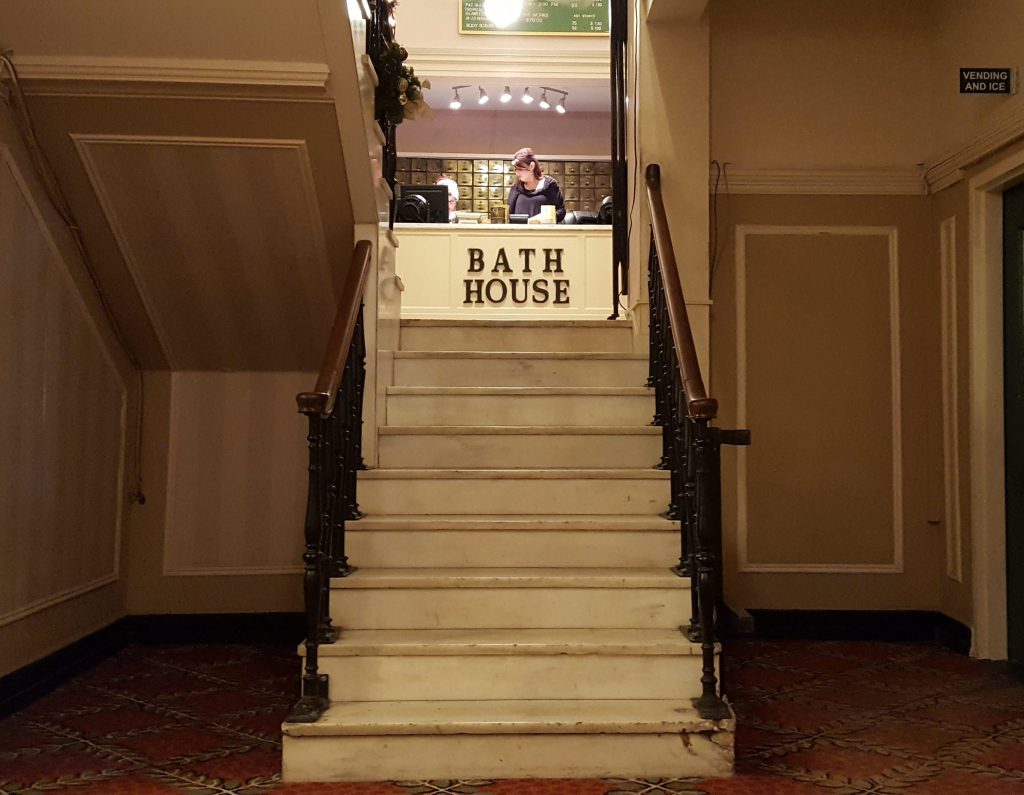 The spa experience starts with a relaxing mineral soak. The tub had what looked like a hot tub pump in it. When we’d soaked for long enough, we went into a sauna to steam the water away. After drying, we were wrapped in hot towels. We laid on a cot, a cold towel on our face to keep us from overheating. A shower in Mineral Springs cooled us off after the sauna and towels.

END_OF_DOCUMENT_TOKEN_TO_BE_REPLACED

It’s almost a new year – the days are already getting longer, sunlight stretching out a little further every evening. You can feel a fresh sort of energy in the air. And, like many, that energy might inspire you to think about how you’ll change this year, how you’ll make efforts to be a new, better, you. You might even make a New Year’s resolution.

But, in two weeks, or a month (or for some of us the third day of January), most of us will give up on our New Year’s resolution. That inspiring energy fades, and life gets in the way. We just can’t make our resolution stick.

The thing is, changing our habits is hard, and New Year’s doesn’t change that. But if you approach it right, you can make a change any time of the year.

END_OF_DOCUMENT_TOKEN_TO_BE_REPLACED

Today marks a turning point – it is the winter solstice, the day of the year with the least light. Our days have been waning since the middle of the summer, growing shorter and shorter with each nightfall. Think of the winter solstice as the sun’s version of a new moon – we will see the least of its light today, but tomorrow, it will wax once again.

The solstice (and winter itself) is one of the origins for our holiday season. Before we had greenhouses, refrigerators, and 24/7 supermarkets, our food supply was inescapably tied to the changing of the seasons. Winter was an unforgiving time of year – food, warmth, and light were all scarce. The entire year was essentially spent preparing for the winter. Cows were slaughtered so they wouldn’t use up precious food during the winter, and the wine that had been fermenting all year was finally ready to drink. The solstice festival was the last feast and celebration of life before winter.