How many things went into your trash can last night? How many of them were plastic?

On average, Americans throw away 4.4 lbs of trash a day. That ends up being about 1600 lbs a year. Now, think about what’s in that trash: packaging for food, empty bottles, napkins, clothing tags, broken toys, and so on. Most of that stuff is made of plastic.

Plastic won’t rot or deteriorate. It’s cheap, easy to make, and you can use it in anything. The invention of mass-produced plastic was undeniably world-changing. But the things that make it so incredible also make it very, very scary.

Because it’s so easy to make and so reliable as a material, we’ve ended up putting it in everything. Plastic permeates our society even more thoroughly than technology. Almost everything on my desk is made of plastic, save my mason jar full of salad and the aluminum soda can next to me.

For the things that last, plastic is fantastic. But we don’t stop with just those – we wrap even the most impermanent items in plastic. We’re obsessed. Since we started mass producing plastic in the 1950s, we’ve made 8.3 billion metric tons. And of that, 6.3 billion has ended up as plastic waste.

Only 9% has been recycled – 79% ends up in landfills, our soil, and eventually the oceans. In fact, we pump 8 million metric tons of plastic waste into the ocean each year.

At this point, you’re likely imagining a sea turtle getting caught in a plastic bag, or a seagull tangled up in those plastic rings from a six-pack of soda. These situations aren’t just marketing ploys. They happen. And they happen a lot more than we think. A 2006 report estimated that 267 different species of sea animals get tangled in or consume plastic debris. A study of shearwater fledglings found that 83% had ingested plastic. Another study by Scripps Institute of Oceanography found that plastic made up 9.2% of mesopelagic fish’s stomach contents1. These fish live in the mesopelagic layer of the ocean, which is approximately 650 feet to 3,300 feet below the surface of the ocean. Plastics have even been found in animals from Challenger Deep in the Mariana Trench – the deepest part of the ocean.

All of this is bad. But it’s just the tip of the plastic iceberg – and what’s inside that iceberg is even more concerning. 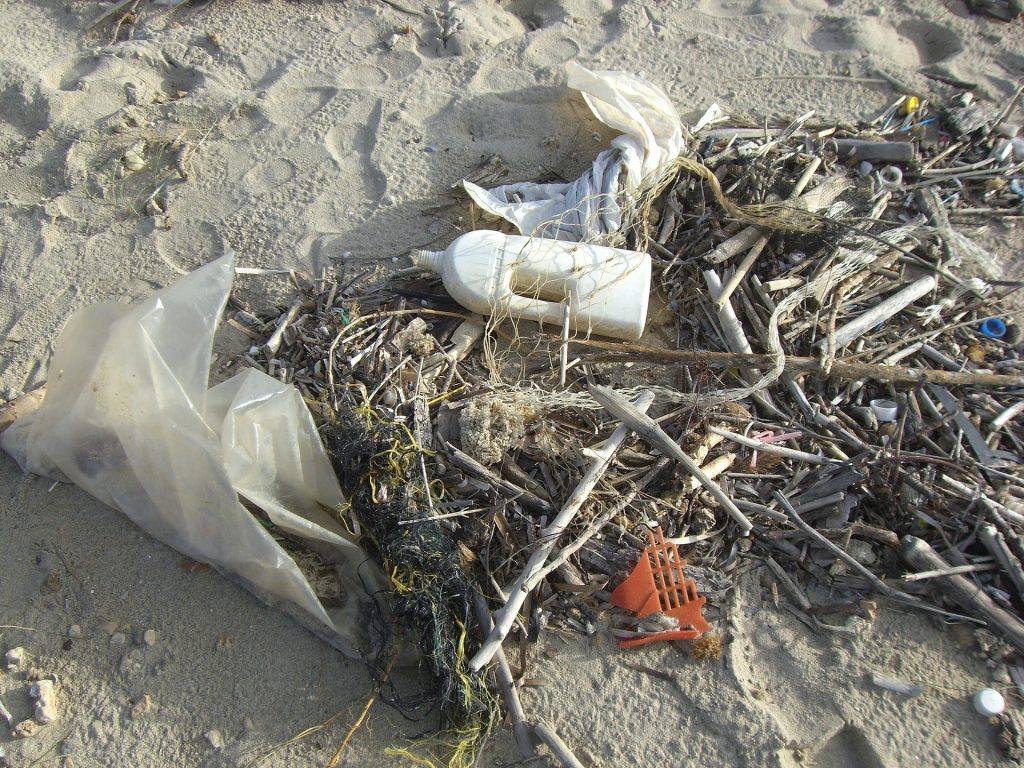 The chemicals within plastic pose even further dangers. Many chemicals, such as phthalates, are added to plastic to make it more pliant or resilient. Pthalates are suspected to be “endocrine disruptors,” which means that they interfere with how our body’s hormone systems function. In particular, they are suspected to interfere with how testosterone functions in men. Another chemical of concern is bisphenol A (BPA), which is another endocrine disruptor. BPA mimics the hormone estrogen, and has been found to cause insulin resistance in animals, which is associated with heart disease. Additionally, BPA can cause hyperthyroidism.

These chemicals are released into the environment as plastics break down. Polystyrene – one of the most popular plastics – degrades at just 86°F, releasing BPA, styrene monomers, and other chemicals. Styrene is a known carcinogen and can be introduced into the body through skin contact, ingestion, and inhalation. If you’ve ever accidentally swallowed sea water, you could have been exposed to styrene. Because plastic is porous, it also absorbs other harmful chemicals, which are released along with the plastic chemicals when the item degrades.

Are you being affected by these chemicals? Yes. In the United States, 95% of adults have detectable levels of BPA in their urine. It’s unsurprising, given that 94% of American tap water is contaminated by plastic. 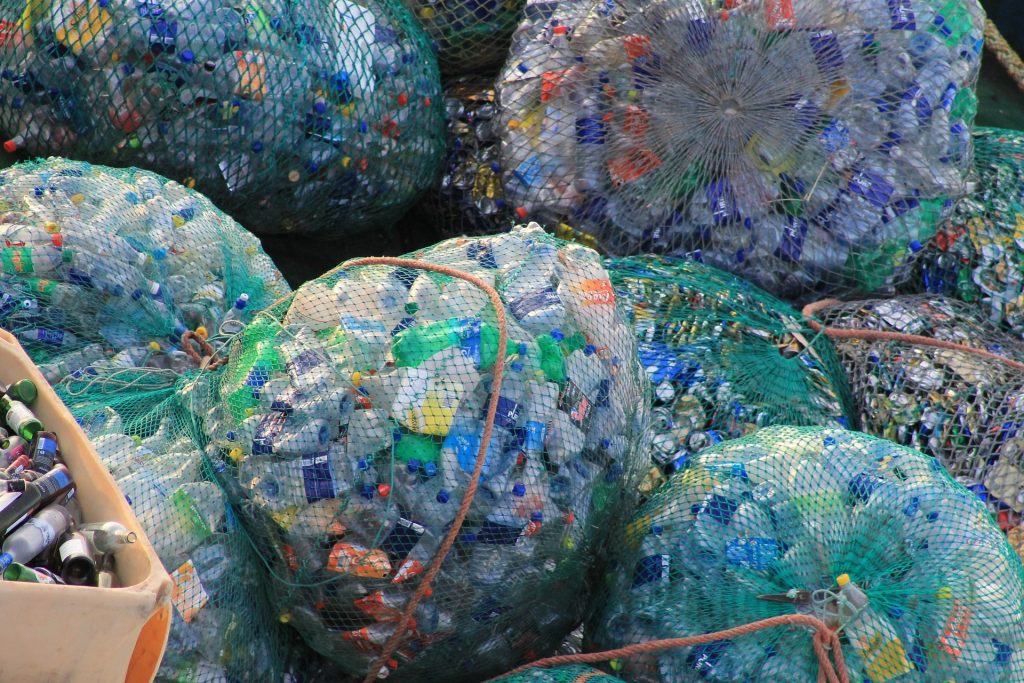 What Can We Do?

Chances are that some of these statistics have surprised, worried, or even scared you. That’s good – we should be scared. We continue to produce and discard record amounts of plastic, resulting in more and more pollution.

What’s the solution? Ideally, we should stop using plastic for disposable items, switch to biodegradable plastics and plastic alternatives, and ensure that existing plastics are disposed of in safe, biologically-friendly ways. The bad news is that these big changes must be made by corporations and manufacturers. The good news is that these same corporations rely on us for a profit. If enough consumers demand plastic-free options, the companies will offer them.

So what can one person do? A lot, it turns out.

Reduce Your Plastic Use

The first step towards curbing our plastic waste epidemic is, unsurprisingly, using less plastic. This means cutting out all those one-use plastic items: straws, disposable forks, cling wrap, water bottles, etc. While these things are convenient, there’s no reason we should be using permanent materials for one-use items. It’s about as nonsensical as carving your grocery list into stone.

When you go shopping, try to substitute plastic items with non-plastic. Materials such as glass and metal are inert, meaning that they do not interact chemically with the environment. Instead they erode and gradually become part of the soil. Additionally, you don’t have to worry about glass or metal containers releasing plastic chemicals into your food. And, when they do break, you can throw them out without worrying.

Reuse Until You Can’t Reuse Anymore (Then Recycle)

There’s a lot of plastic already in your life, and reducing your intake today won’t magically get rid of it. That’s ok. You don’t need to throw away the plastic stuff you already have – and you shouldn’t, because that turns your plastic items into plastic waste.

Before you trash anything plastic, see if you could use it for something else. I used all my old plastic Tupperware containers as plant pots. I use empty water bottle halves and tin cans for this as well. Many people make comments about needing to buy me “real pots,” because they think I do this to be frugal.

You can reuse most things if you get creative. Some things, like containers, are obviously reusable. With a bit of creativity, almost anything can be. Tupperware lids become coasters or saucers, old toothbrushes become scrubbers, a dead phone becomes a toy one. Don’t stop at plastic – reuse everything you can.

I will be honest with you – reuse isn’t sexy. At times (like with my pots) it has a bit of a post-nuclear fallout aesthetic. Sometimes it just looks like you’re poor and doing the best you can. The bottom line is that appearances don’t matter in the face of plastic pollution.

Go All the Way and Try Out A Zero Waste Lifestyle

If you want to take the most hardcore option, look into zero waste living. It’s exactly what it says on the label, and it’s a great thing to strive for, though few of us will ever truly achieve zero waste. At its core, zero waste living is about reducing our waste by reducing our consumption (and vice versa). This means buying secondhand instead of new, mending things instead of replacing them, and repurposing broken items.

Yes, zero waste is hard. Full disclosure: I can’t do it. There’s no shame in that – I have too much going on right now to devote 100% of myself to zero waste. But we don’t have to be zero waste to start applying its principles to our lives.

Start by reducing your waste and reusing what you can. Even if you only manage to cut out one plastic bottle a day, that’s a little bit less waste in the world.