There’s not an uneventful day at Woodruff Family Law Group. Usually, surprises come in the form of laughter – witty comments in the back office, or a story about one of our lawyers that I haven’t heard yet. Sometimes they’re bigger things, like the water main bursting and turning the street outside into a river.

Oftentimes, it’s Carolyn that brings the unexpected to me. She herself is unexpected – though she’s a small woman, her larger-than-life personality fills the room, commanding your attention. She moves through life at a fast clip, and I feel like I’m always trying to catch up with her.

So, when Carolyn summons me to her office on a Wednesday morning, I’m a bit apprehensive and not at all sure what to expect. 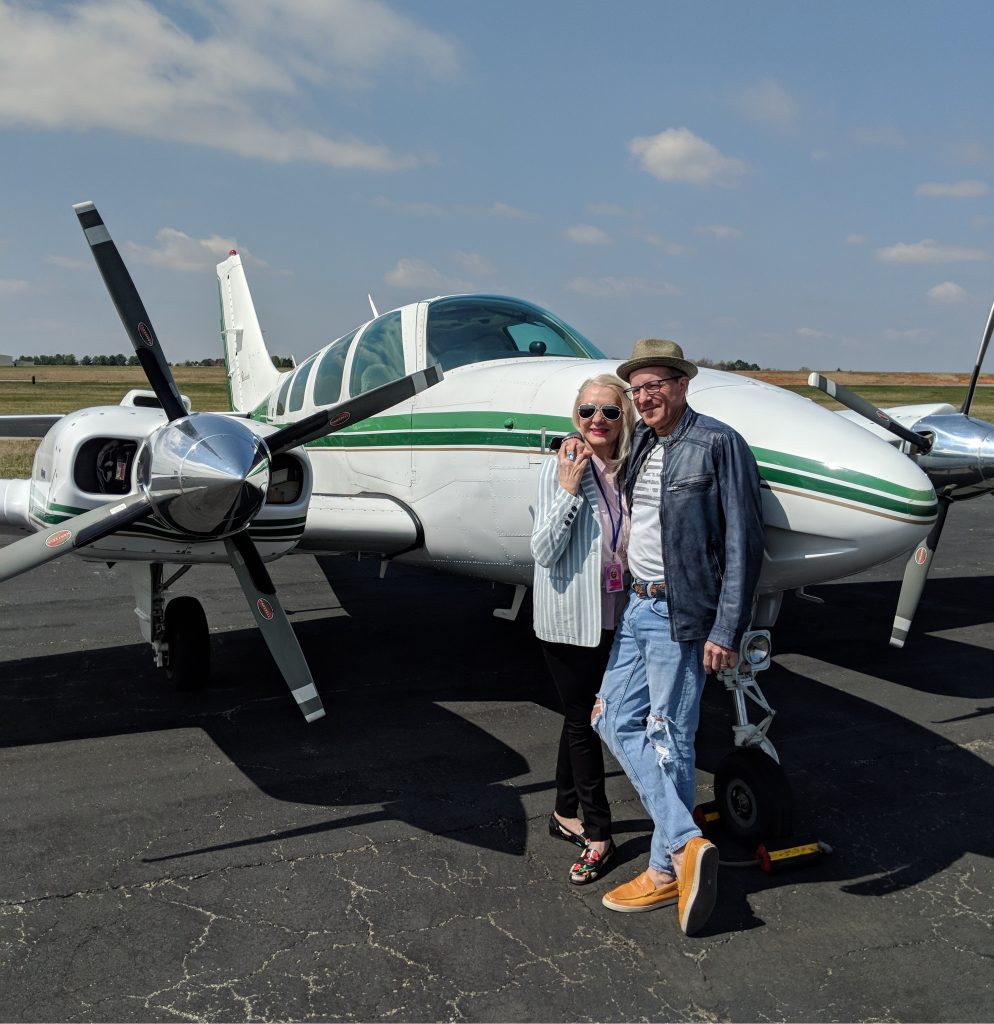 “We’re going to the airport,” she tells me. “I’ll explain on the way. Meet me at the back door in about eleven minutes.”

And with that, the adventure begins. I’m whisked away to the airport, where Carolyn and her husband, Dwight Ensley, are doing a photo shoot for the firm plane’s new interior.

The designer, Jenny Van Stone, meets us in the lobby. Jenny is upbeat and easy to talk to. She tells me that she fell into this field by accident – before designing for airplanes, she worked in interior design.

Jenny leads us out to the hangar, where a green-striped plane awaits us. It’s a Beechcraft Baron, with twin engines and six seats. Carolyn opens the doors to reveal a cozy, earth tone interior. The brown-and-tan carpet has an abstract yet almost bark-like design, and the passenger seats are upholstered with distressed aviation leather. I ask Jenny how that differs from regular leather, and she explains that aviation leather has “very strict regulations for fire retardancy.” 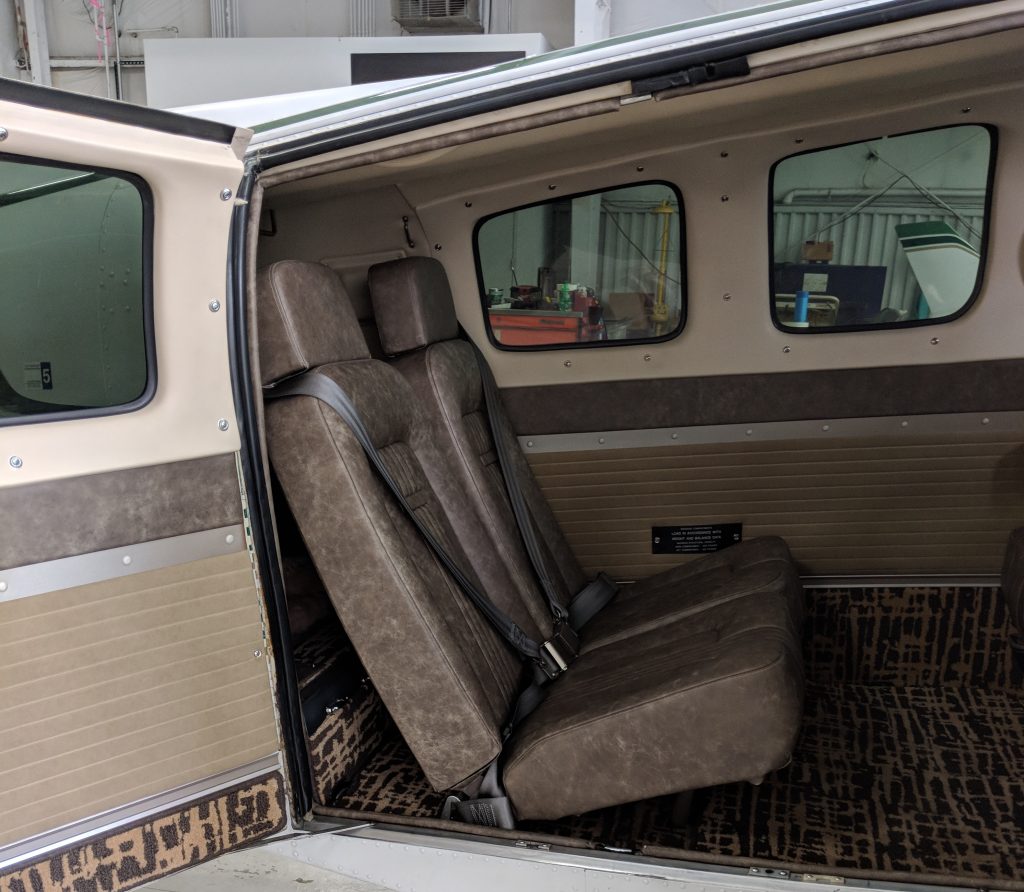 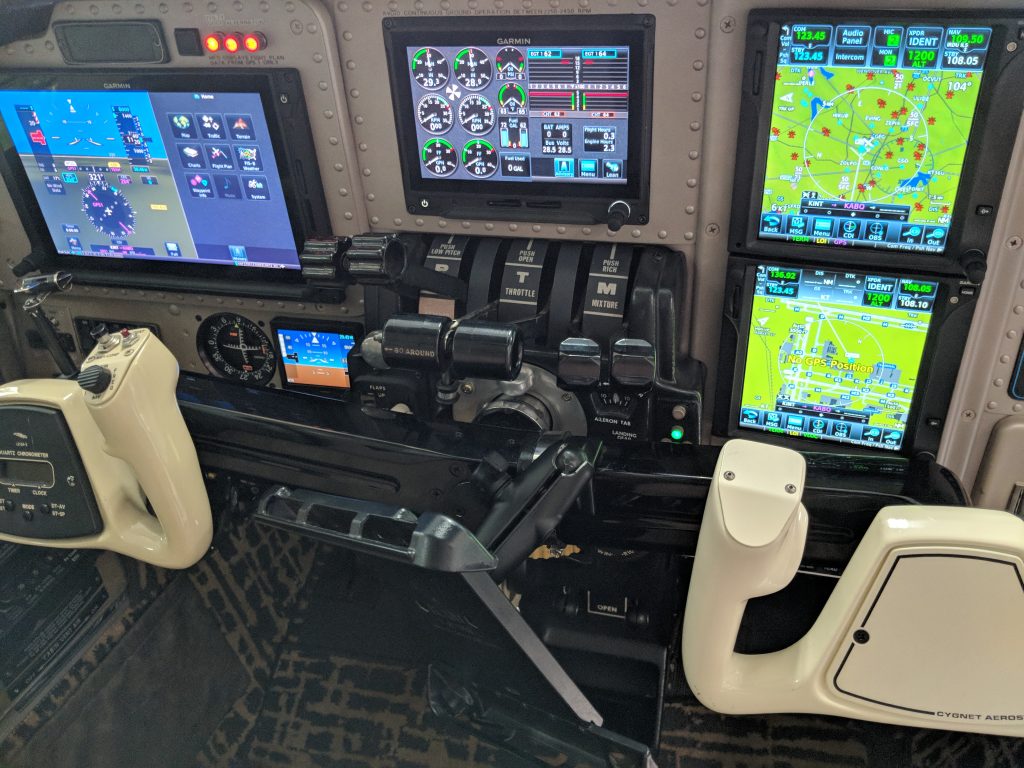 The seats in the cockpit are covered with sheepskin instead of leather. The biggest upgrade in the cockpit, however, is to the avionics. The new avionics are made by Garmin, and with the plane connected to power in the hangar, we’re able to see what they look like when on.

Dwight has already been testing the instruments out. He refers to the flashing screens as Carolyn’s “new Gameboy,” and jokingly suggests they get Netflix working on them so that he can watch MASH.

No one has flown the updated plane yet – it’s only been run up on the ramp to test it. Jenny informs Dwight that there’s a flight instructor available who can fly with him the first time and teach him how to use the new avionics. Dwight declines, says he just needs to play with them a bit more. 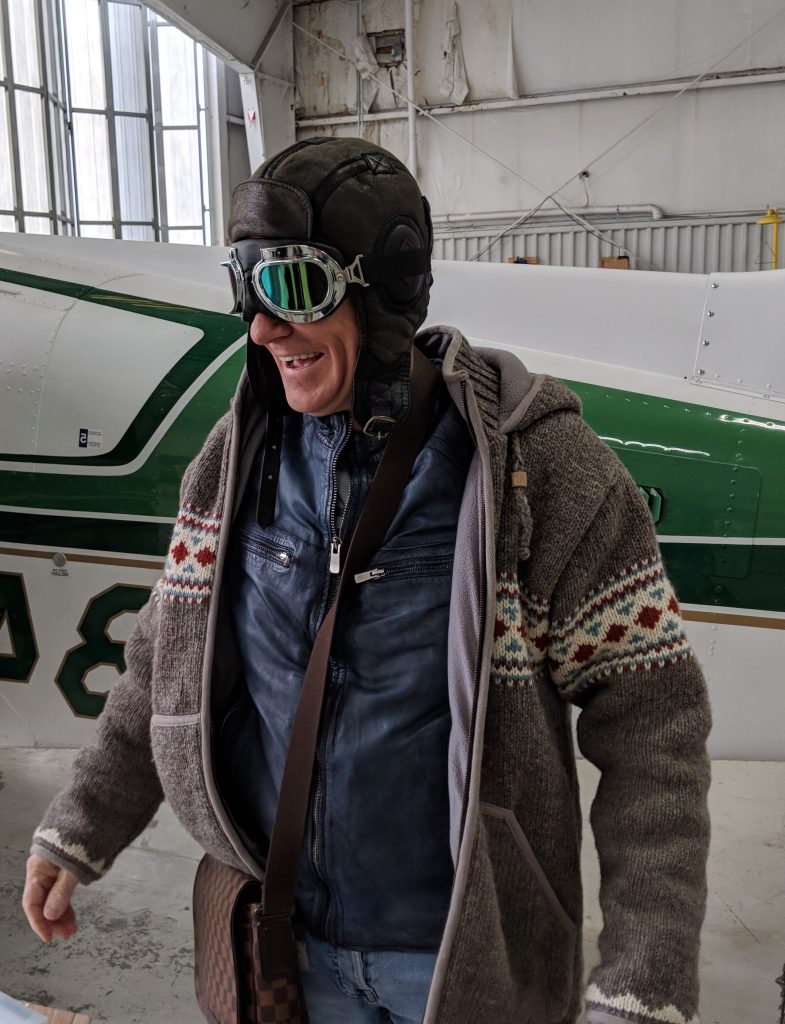 He pulls his other new toys out of a bag – a bomber helmet and goggles, courtesy of Jenny, who proudly proclaims that they’re from Poland. Dwight puts them on and grins at us. He jokes that he should take the plane up and do a few rolls so we can get some good photos.

“I should do a low-altitude inverted flyby,” he says.

“I don’t think anyone would volunteer to go with you for that.” Carolyn’s holding her face a bit tight, as if she’s worried, but amusement crinkles her eyes as she speaks. “You’d lose an engine. You’ll be doing engine recovery upside down.”

In an aside, she quickly assures me Dwight wouldn’t actually flip the plane. I just smile – out here by the tarmac, her usual brusqueness is falling away.

Jenny takes us to the upholstery shop to meet the men who worked on the plane. A smell hits us as we enter – slightly sweet and yet a bit chemical. It’s not unlike the smell of rubber cement.

On the floor in front of us, a man is blow-drying the leather upholstery on a chair. He introduces himself as Jerry Quidort, and Jenny informs me that he worked on the side panels in the firm plane.

Jerry is also the creator of Carolyn’s special booster seat – she’s too short for the Baron, and so the booster seat makes her tall enough to fly it. The sheepskin coating on the booster perfectly matches the seats in the cockpit. 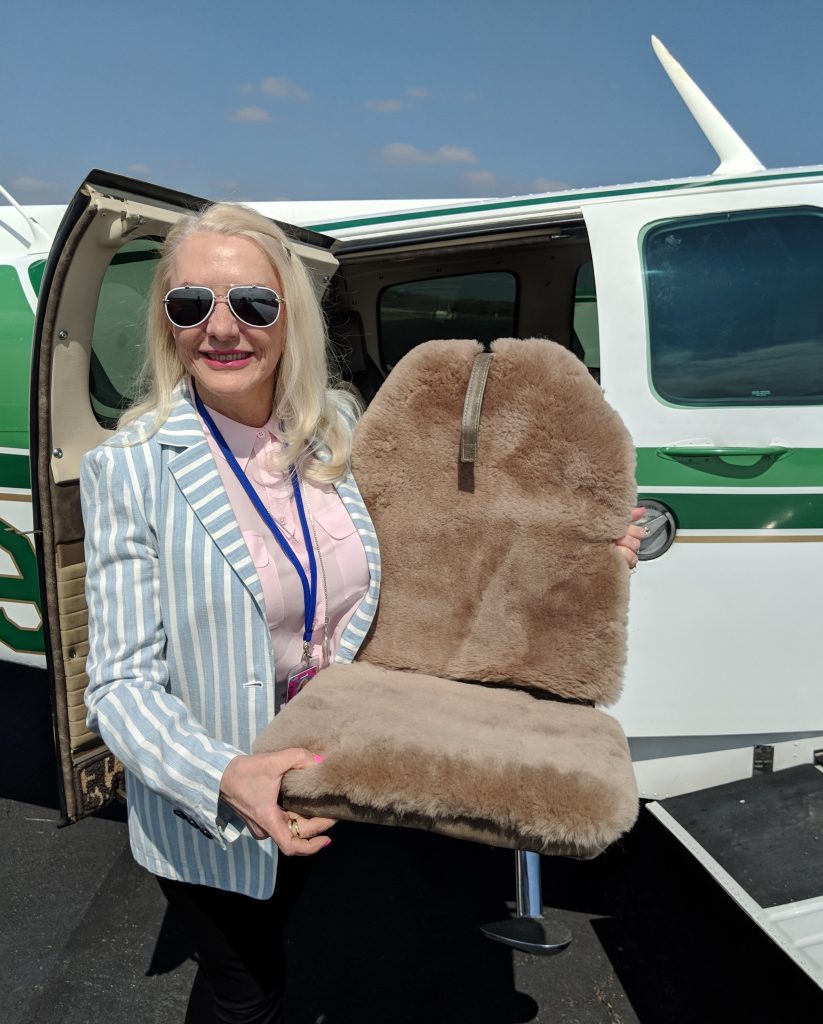 I ask Jerry about the chair he’s working on, and he points out the man who did the upholstery, Robert Johnson. Robert built and upholstered the seats in Carolyn’s plane as well.

“I supplied Robert with some ideas and design layouts, and he made it all happen,” Jenny says.

One by one, we meet everyone who worked on the plane. We’re joined by Michael Jarrell, the head of customer service and Carolyn and Dwight’s point of contact, as well as Zak Taylor and Wade Taylor. Zak worked on the side walls, while Wade did detailing on the laminate strips and faux rivets. The men don’t seem to be used to this many visitors.

Carolyn, Dwight, Jenny, and I pile into a golf cart and drive out to join Tyler on the tarmac. Another aircraft passes overhead, announced only by a low hum, but Carolyn’s eyes are on the baron. It stands proud, wings gleaming in the sunlight.

Dwight nods. “It’s the nicest Baron out there.”

Carolyn and Dwight climb into the cockpit, and Tyler and I take turns shooting photos from the backseat.

It seems to me that the cockpit is a glimpse of freedom for Carolyn. Soon, she’ll be headed to court. Tomorrow, she will be in mediation all day. But right now, with her headset on and her hand gripping the thrust lever, I think she can almost taste the clouds. 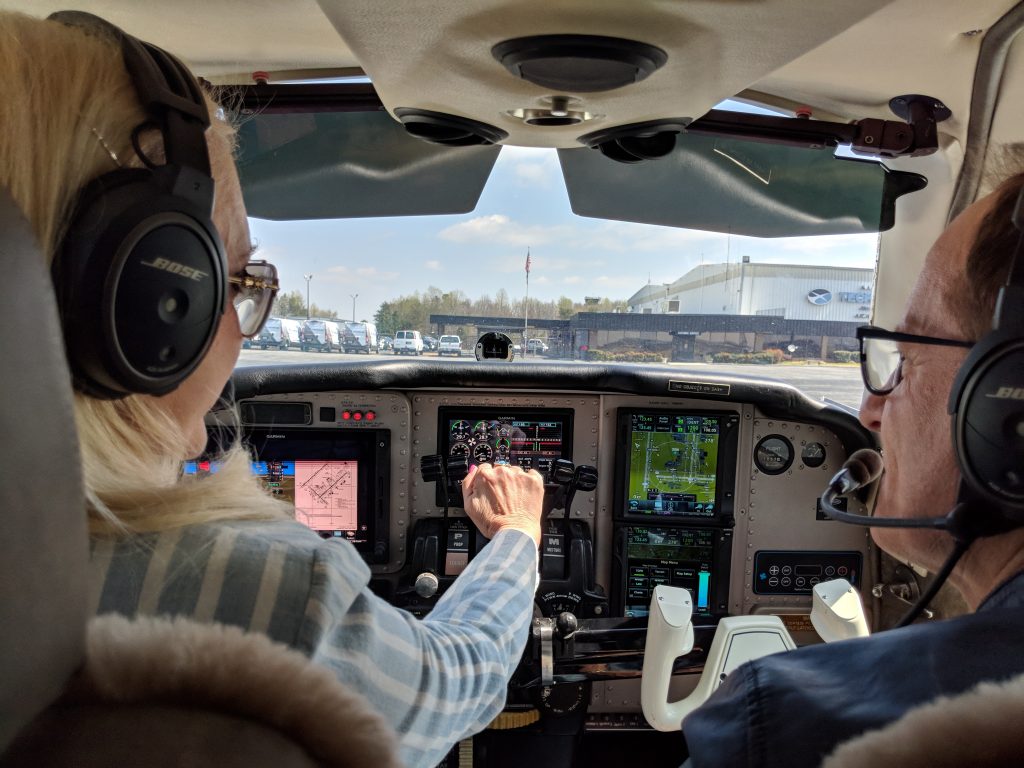