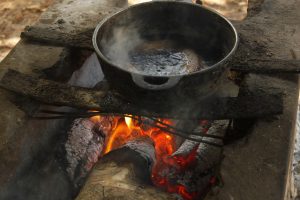 “What’s going on here?” asked the villager, eyeing the soldier’s fire and pot.

“I’m making stone soup.” The soldier glanced at the pot and frowned. “It could really use some garnish, though. Do you have any?”

The villager smiled at him and reached into his bag. “I think I have some carrots.”

He dropped a few of his carrots into the soup and wished the soldier luck before continuing on his way to the market. When the next villager stopped by, the soldier asked him for garnish as well. One by one, the villagers approached the soldier, each adding another bit of “garnish” to the soup. Eventually, the stone soup was complete, and everyone in the village was able to share it.

While there is a bit of trickery involved in getting the villagers to contribute resources to the soup, the story of stone soup is a story of community giving and sharing. Think about this during Thanksgiving.

Last weekend my husband, Dwight, and I made our favorite winter soup. It’s not stone soup, but I think you’ll still enjoy the recipe.

You don’t have to borrow ingredients from villagers; there’s no salt, and (best of all) there’s little preparation. Just combine the ingredients in a large stockpot or crockpot, season to taste, and simmer until the flavors have melded. 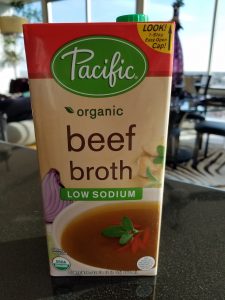 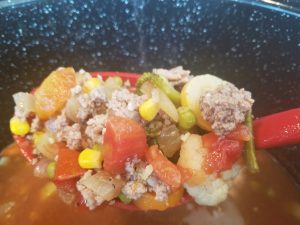 This recipe can be doubled or tripled and make soup for the entire winter. We package it in the freezer in small one serving glass bowls and eat it for lunch.

Making the soup can be a family activity for the holidays, and I wholeheartedly recommend both the activity of the soup making and the soup.
Enjoy.