January 10, 1918: In 1918, the U.S. House of Representatives. voted 274 to 136, two-thirds only by one vote to pass the 19th Amendment. Remember Jeannette Rankin of Montana who, a year earlier, had become the first woman in the House of Representatives, implored: “How shall we answer their challenge, gentlemen: how shall we explain to them the meaning of democracy if the same Congress that voted for war to make the world safe for democracy refuses to give this small measure of democracy to women of our country?”

June 7, 1918, President Wilson answered the concerned letter of Mrs. Catts, one of approximately 30 she wrote to the President. 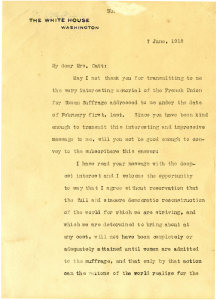 October 1, 2918: The Senate did not pass the 19th Amendment, so it failed in the 65th Congress. The resolution failed 53 to 31. Passage required two-thirds.