The Senate concurred shortly afterward. But would three-fourths of the States of the then 48 states concur?

By the summer of 1920, 35 of the necessary 36 states had ratified the amendment. Eight states rejected it. That leaves five undecided States. The Tennessee Senate voted to approve.

The Hermitage Hotel became the campaign headquarters for both Catts and her detractors. The detractors set up hospitality suites for the legislators and plied them with alcohol. Remember, Prohibition’s ban on liquor began in January 1920.

August 17, 1920, Febb Burn, Niota, Tennessee, mailed a letter to her son, the Honorable H.T. Burn. Henry T. Burn, only age 24, was the youngest person in the Tennessee legislature. 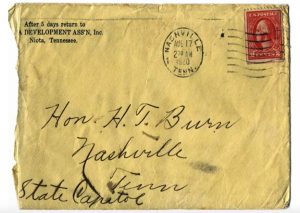 August 18, 1918, Nashville, Tennessee. The all-male Tennessee legislature held the key to woman’s right to vote. As the legislators gathered, men wore red roses on their lapel for a “no” vote, and a yellow rose for a “yes” vote to ratify the 19th Amendment. Of the 96 legislators, half wore red and half wore yellow, meaning the ratification would fail. The Suffrage lobbyists, including Mrs. Catt, watched from the gallery.   Henry T. Burn wore a red rose, but his Mother’s letter was in his breast pocket.

“The Honorable Henry T. Burn, how do you vote?”

Henry slowly pulled out his Mother’s letter and held it open in his hand. The letter was in pencil.

“Hurrah and vote for Suffrage and don’t keep them in doubt,” his Mother’s letter said.

Henry took a deep breath. All eyes were on him from the packed gallery.

In this end, one Mother’s soft voice and one vote sealed the vote for all women in the United States by the 19th Amendment to the U.S. Constitution. Yes, one vote matters.